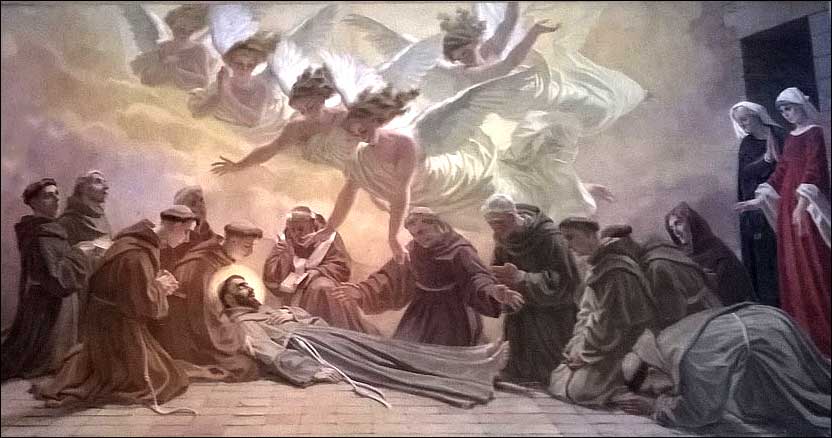 Saint Francis of Assisi lay on his deathbed. He was singing, and singing so loudly that the whole neighborhood was aware. Brother Elias, a pompous but prominent member of the Franciscan order, came close to Saint Francis and said, ‘Father, there are people standing in the street outside your window.’ Many had come. Fearing that the last moment of Francis’ life had come, many who loved him had gathered together around the house.

Said this brother Elias, “I am afraid nothing we might do could prevent them from hearing you singing. The lack of restraint at so grave an hour might embarrass the order, Father. It might lower the esteem in which you yourself are so justly held. Perhaps in your extremity you have lost sight of your obligation to the many who have come to regard you as a saint. Would it not be more edifying for them if you would, er, die with more Christian dignity?”
“Please excuse me, Brother,” Saint Francis said, “but I feel so much joy in my heart that I really can’t help myself. I must sing!”

Saint Francis of Assisi has a different vision — he is just ordinary. He says, “Please excuse me, Brother, but I feel so much joy in my heart that I really can’t help myself. I must sing!” In fact, it is not that Francis is singing, Francis has become the song. That’s why he cannot help, he cannot control. There is nobody left to control it. If the song is happening it is happening. It is not within control, it can’t be, because the controller has disappeared. The self, the ego, no more exists. Saint Francis does not exist as an individual. There is absolute silence inside. Out of that silence this song is born. What can Francis do? That’s why he says, “I can’t help it. I must sing!”

And he died singing. And there can be no other better death. If you can die singing, that proves that you lived singing, that your life was a joy and death became the crescendo of it, the culmination.